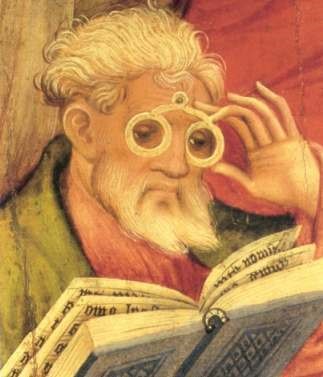 For many of us, we cannot go out without those sleek glasses of ours; it makes us look beautiful, makes us look professional, makes us see clearly, makes the 3D movie real, protects us from the sun, and makes us look like scholars. Whatever be the case, wearing glasses has become very fashionable, we even buy them to fit our different attires and for different occasions. Unfortunately, not many have taken the time to even know or appreciate the inventor (s).  Even among eye care professionals whose life is practically centered on them, they barely know the first man and his first eyeglass.

I know many of you would say who cares? We shouldn’t be ungrateful, all of the possibilities we now enjoy from wearing glasses came because of the crude creative ingenuity of these great minds.

The first eyeglasses were made in Italy in about 1286; it is believed Salvino D’Armate invented the first eye glasses around 1285, though various sources suggest an earlier origin. According to the Ancient Chronicle of the Dominican Monastery of St. Catherine in Pisa, eyeglasses were first made by someone who was unwilling to share them. Allesandro della Spina, an Italian monk, was the first to make them and shared them with everyone with a cheerful and willing heart and is often credited with inventing eyeglasses.

Initially, eyeglasses looked like this and the wearers held them with the hand or with ribbons around the head. It is believed that the modern style of glasses, held by temples passing over the ears, was developed some time before 1727, by the British optician Edward Scarlett.

They were called eyeglasses because they were actually ‘glasses’ over the eyes. Early evidence suggests people used them either for seeing clearly at distant object or for reading tiny prints.  Unfortunately for an America Scientist by the name Benjamin Franklin, he had both problems, couldn’t see clearly at far (myopia) and also couldn’t read his books. He obtained two different pairs, one for reading his book and the other for seeing things at far. It looked so cumbersome for him carrying both pairs and the tendency to mix them up. He devised a means to combine both glasses to become one, which gave rise to what we now call bifocals (glasses with two portions).

Much of the invention we have seen with eyeglasses came largely from individuals, scientist or professionals who wanted to make life easier both for them and for others. In ancient Rome, the emperor Nero would hold a polished emerald in front of his eyes to reduce the sun’s glare while he watched gladiators fight.

Today, we have seen very significant development with eye glasses, what started possibly as a caricature, has progressed to very beautiful ornaments for medical solutions and even for fashion. We now have different types of eye glass designs ranging from prescription glasses, safety glasses, cosmetic glasses, sun glasses and 3D glasses….

The future even looks more promising with the massive investment into virtual and augmented realities leading to the creation of numerous eyewear technologies. Before we start making glasses that can see aliens or ‘spirits’, it is important we remind ourselves were it all started.

Dr. Lucky Aziken
Dr Lucky Aziken, a multitalented Optometrist believes health education is key towards achieving a healthy society. He is passionate about knowledge and creatively communicates his thoughts. He loves reading, writing and connecting people.

Nobody needs to tell who’s the nerd in the movie. By their eyeglasses, ...
EyeWear

Everything works well in a caring hand. Your Contact Lens is a medical ...

When we talk about using contact lenses, the parts that quickly stimulate our ...
EyeWear

Did you know that the part of your eye called the cornea actually ...